For today’s main course we will be serving up a hearty serving of alphabet soup, as I try to work through which music exam is most appropriate for Opie.

There are two main contenders where we live. Neither is based in the US – ABRSM (Associated Board of the Royal Schools of Music) is out of England, and MDP (Music Development Program) run by RCM (Royal Conservatory of Music) out of Canada. Some states apparently have their own exam systems (ex: Utah) but not here in Massachusetts.

Teacher and I both felt working toward an exam would be a good goal, although for different reasons. He comes from a background where exams and competitions were part of the learning experience, and feels they are very helpful in pushing a student to strive harder. I, on the other hand, had never even heard of such opportunities growing up. But I came across the concept while trying to learn more about the oboe, and it was intriguing. The material a student is expected to learn seemed reasonable and useful, I liked the idea of an overall progressive structure with clear steps that can be attained, and I like the exam as a low key way of introducing performance under pressure.

The next step was figuring out which exam path to go down. Teacher was not familiar with either system and didn’t have strong feelings either way. So, I made a spreadsheet. Because things are always easier to figure out with a spreadsheet. 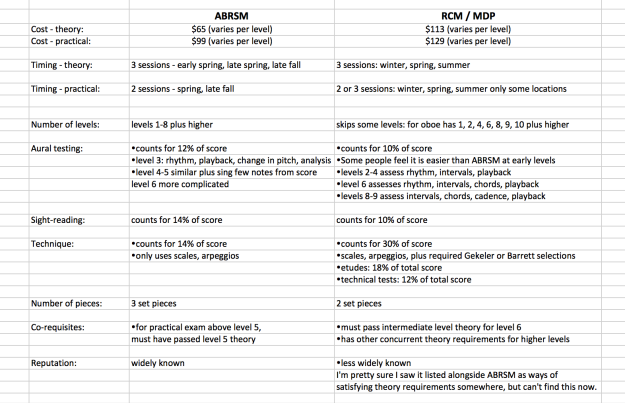 Both tests have students do similar activities: perform two or three pieces from a list of options, technique, aural tests, and sight reading. Both have levels ranging from 1 to 8 or 10, and beyond. Levels seem roughly equivalent. The Boston area is a testing site for both exams.

The big differences boil down to these things:

At the end of all this analysis and a lot of discussion, we both were in favor of trying the RCM/MDP approach. For me, I really liked having the etudes part instead of a third set piece. From my reading it seemed more similar to what happens at auditions. I also like the idea of having more theory.

As Opie has progressed in music, I am realizing just how deficient were my years of piano. As best I can tell, I had no theory at all, and I feel the lack. I like her learning theory also because she is young, and inexperienced, and this seems like a way of her gaining more musical knowledge to compensate for her age. Plus she’s enjoyed the theory that she has had so far. Finally, I’m not sure it matters that there are grades skipped since I don’t think one would want to take every level.

The plan is to have Opie test for level 4 practical next spring. If they offered level 5 in oboe we would probably go for that, because Teacher would rather aim a level or two above where she is now, but level 4 it will be. She will also start doing theory as part of piano with an aim of testing for intermediate theory in a year and a half.

We’ve talked it over with Opie though without tons of detail. She’s a little skeptical but willing to give it a go.

If you have personal experience with these exams — or alphabet soup — I’d love to hear it!